Can translation do justice with original texts? An opinion 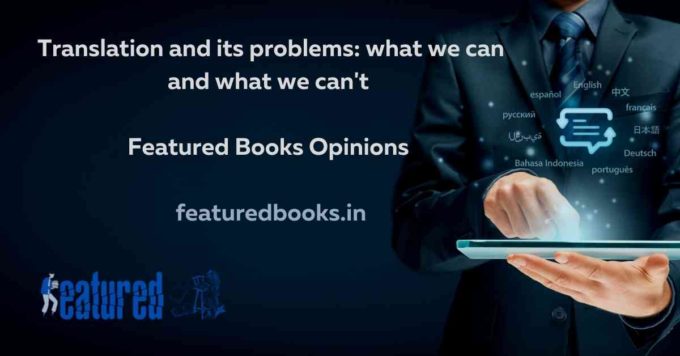 Language, as a mere tool to express our thoughts in words that others could understand, is something that can be translated into various languages and people from different parts of this world can read, watch and enjoy any movie, book or anything that requires a linguistic approach. In short, translating a language into another one is a task that can be said to be easy (and it is once you learn both languages). However, wait, think twice. Can we ever translate an original work written in a particular language into another language and have the same vibes, force, reading pleasure and originality? Can you think about it in details? This is something that has kept me intrigued for more than a week now. In this article, I will share my thoughts on this issue.

Let’s begin with a very simple (yet effective) example. In India, we have been brought up with spiritual thoughts and we understand Atma and Parmatma very comfortably. Atma (or Aatman) being the soul inside a human body while Parmatma being God, the Palankarta, the all-powerful God. However, in English, we know Atma as soul and Parmatma as super-soul. However, super-soul cannot come close to our understanding of the word Parmatma.

Now, going in the reverse direction, take the example of a word, Over. In Cricketing terms, this is a spell of 6 balls delivered by one baller from one end (by two in extraordinary circumstances). However, super-over is totally different! Well, anyone who doesn’t even have the in-depth knowledge of cricket, can easily understand an over. But, when we talk about super-over, it might be confusing for that person – is it a 10-ball over? 12-ball over? An over by two ballers together? Well, confusions will be much!

Now, to make things clear, I believe that culture, history, knowledge of the region and many other things matter when we talk about language. And while words can be translated into another language, it’s almost impossible to render emotions, culture and history into a different language than the language in which a particular text originates! While we can translate Meghdootam into English or other languages, we cannot fuse the same emotions that the original Sanskrit version will bring to a reader. Likewise, while Shakespeare’s sonnets can be translated into any possible language, the emotions and his thoughts cannot be translated into any of those!

Another thing, and very important, that should be taken care of while translating seminal works into a different language than the languages of the original region is that the translators should not play interpreters. This might change the outcome for the readers who don’t come from the same culture or don’t understand the philosophy, social structure or even politics of the place from where the text originates. For instance, a person who doesn’t know Ramayana in details can never understand the importance of this line:

As obedient as Ram, Mr Sushil was always the pride of his parents.

At the same time, someone who is not very much aware of the elite English society and its literature cannot understand the translation, however accurate, below:

Well, this is where I will conclude my two-cents on the dilemma of translations and I do believe that readers of this article will understand how the nuances, the genesis and the origins can affect our abilities to translate a work and interpret a translated work. I am not against translation because this is what makes a work of art accessible to the world without much play of the barriers of languages. However, everything depends on how we understand a language – a mere tool for communication or the assimilation of culture, history, literature and atmosphere of a place! Do let me know your thoughts and I will be more than happy to interact more.

By Amit for Featured Books