The literature of problem – from Kanthapura to The White Tiger 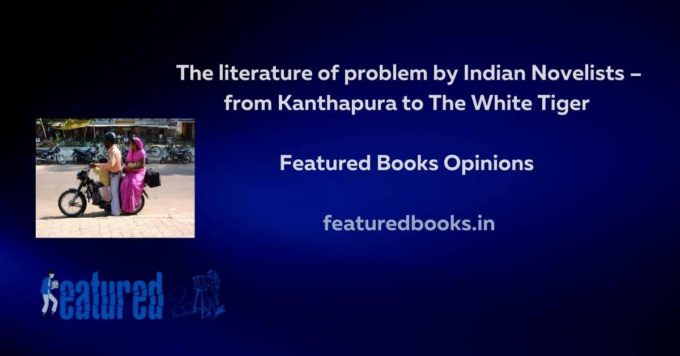 Indian English literature is as old as the arrival of English in India. It was the language of the elite. It became the language of the ruling society, extended political families, and eventually became the professionals’ language. In the early 20th-century, when Indian English literature started making its path with a vision and several goals visible on the world literary map, the novelists who were writing novels in English tried to do something extraordinary. The literature started reflecting common goals, common ambitions and also common problems. It was liked by the readers. Coming forward, in the years close to our independence, ironically from the English but not the English, novelists like Raja Rao, Mulk Raj Anand, and R K Narayan started striding towards their peak. And that was the phase which saw wonderful novels loaded with the problems and thus the title of the article says it clearly – the literature of problem. Kanthapura exhibited the problem of the Indian caste system, untouchability, widows barred from marriage and many more to the world. However, did you read the novel to find a sweet conclusion? Raja Rao also shows the way forward… he gave his own literary vision that could serve as a vision to end the problems that the novelist highlighted. It was, for me, the literature of problem at the best!

Coming forward, or rather doing it in a fast forward x32 mode, we have modern problem literature – the novels by Aravind Adiga, Kiran Desai, Arundhati Roy and even Jeet Thayil to an extent. What does it show? what do you see? Their problems are incessant and they never want to resolve the problems. The modern Indian English literature of problem is too problematic – you may say that…

Remarkable of them all, the 2008 Man Booker Award-winning novelist Aravind Adiga does not take even a single step back when it comes to highlighting the problems of the common man. He is very sharp in picking the humane follies, ambitious errors of judgement, issues with ascribing values to one’s dreams and practical reality and also, the problems that our nation faces as one family. Adiga is a master of the art that can be summarised as making something look grand and he is very good at it when the object is very bad at it! Hope you get it. Nevertheless, highlighting the problem is too orgasmic for him that he forgets the major job of a novelist is to show the way forward – or, at least, the very basic sentiment of literature says that it not only shows the mirror to the society but also shows them a vision that might lead them towards betterment. Tagore talked about universal humanism and Aurobindo discussed the world as a family striving towards perfection together. Where are these humane concerns in modern novels?

Kanthapura was a prime example of meaningful literature and it will always be the symbol of a perfect satire that taunts about a problem and comes up with the solution to the same eventually. Moorthy’s efforts do bring expected results and the whole village come together to resist the evils who try to rule them without any sympathy even for basic human rights. Coolie by Anand indirectly tells the readers that we can embrace Gandhi’s vision to come together and eliminate the problems that we face. R K Narayan sought his refuge in traditional Indian philosophy preached in Hindu scriptures and tried to convey that one should seek inwards for solutions to all the possible problems that modern humanity faces. Modern novelists are too keen to highlight even the minor problems of our society and they enjoy this. They seldom move ahead from the problems and try to, at least, show a possible remedy. The very basic purpose of literature is betrayed by those who are writing it today!

by Alka Mishra for Featured Books