The Plight of a Mother by Phidalia Toi – Review 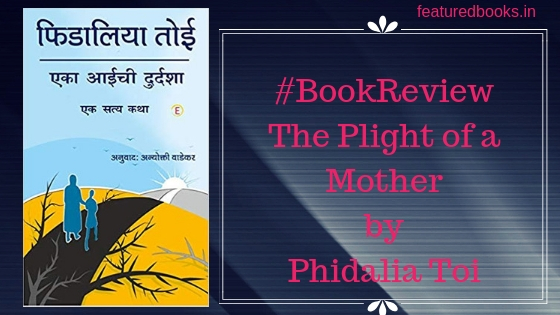 Many stories of mothers doing their bit for children are there. Literature is filled with instances like these. However, when it comes to real stories or true stories of mothers, we can certainly recall only a few that have been translated into pieces of literature. Many of them go unnoticed. I got the chance to read one such book by Phidalia Toi – The Plight of a Mother. Published in 2017 in English, the book has seen different editions in different languages. Phialia Toi, who is a popular author with many books under her credit, has written the experiences as a suffering mother when her daughter was diagnosed with cancer.

As the title suggests, it is mainly about the mother’s courage amidst the discomfort and troubles of various kinds. While Laleleki’s father was not able to do much, it was only Phidalia who had to do almost everything – right from the beginning to the end. Cancer is something that breaks the zeal at the very first meeting. Especially in India, once someone knows about cancer, half of the hopes are gone instantly! However, The Plight of a Mother is a book that brings courage and hope and joy to the readers; fight and that side the victory awaits.

Not much needed to say about the content of the book as that’s a record of the events that took place in the past. However, the author has done quite impressive work in bringing the events to the readers in a way that it becomes interesting enough to keep them engaged and inspired to read the next chapter and continue doing so.

Much has been ascribed to God. The religious overtone is evidently present in the book and that can easily be traced by the opening lines of each of the chapters in the book – Biblical references.

The book might be interesting for mothers, elders and a few youngsters who want to read something different than the usual course of reading. If you want to read the episodes of a mother and her daughter, you can grab a copy from Amazon and enjoy reading it.

Get a copy of the book – Click to buy from Amazon

review by Pankaj for Featured Books

The Plight of a Mother

For select readers who want to read true stories of suffering and coming over it with the victory.