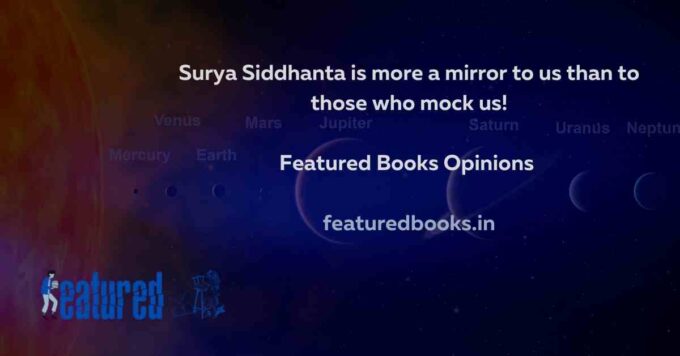 How many of us know that our Vedic or pre-Vedic era, per se according to the hallucinating Aryan theorists, scientists or Jyotish or astrologists knew many things more than modern science could ever discover? A young man may laugh and start shooting the imaginary foes again, discarding the foes to his very existence and a young woman may find herself busy again in texting one of her friends about the dress she wore last night at the party. Our ancient wisdom was looted because we were not vigilant enough to learn how to decode the same. Those who took it from us by pitting us against our very own have become rich and we are still labelled as the country of snake charmers, thanks to a certain Pandit Ji!

Surya Siddhanta or the theory of the Sun is a seminal work that should, any day, possess the qualities to look into the eyes of modern, confusing and defeated science and ask certain questions – what would you do without a spacecraft today? What would you do without a telescope today? What would you do without a mobile phone today? The scientists who cannot survive a single day without airconditioned rooms cannot appreciate the very fact that the ancient Hindu civilisation was way beyond our comprehension and, as Praveen Mohon, the famous YouTuber who surveys ancient Hindu civilisation and sculptors and temples, says ‘no, everything could not have been made with primitive tools’!

Surya Siddhanta is a text that might have confusions with fixing its publication date because the record-keepers could not fix a date yet or their prejudices didn’t allow them to do so. However, the calculations and the fixations this text has done about 2-3 thousand years ago, at least, or about millions of years ago as many believe according to the same text and many others, are more than accurate and raise many questions about the world we live in.

It is quite ironic to see the world waking up to the theory of a simulated world today. However, the ancient Hindu texts have already warned us that the world we see around is nothing more than Maya, an illusion, and the journey of a soul is once fruitful if one is able to see through this Maya and yet indulge in Karm accordingly. The world, it seems, might have learned about these things recently. However, the Indians, the followers of Sanatan Dharma, have known it all the time and yet, they are the ones who could not preserve it in the latest century and before, recently.

Well, it’s never too late to do the things that are right, justified and necessary. And therefore, those who care must read Surya Siddhanta at least to know what could our ancestors do many years ago and why we don’t need any words of approval from the world on our ways of doing things the way we do the same. Do get a copy and read the book ASAP. Here is a link from where you can download the same:

By Anivesh Sharma for Featured Books