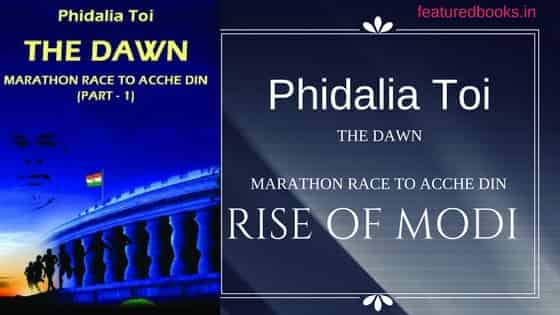 The general notion about the political books is very simple – it must be biased, either pro or anti something. There are rarely the books about political observations which actually narrate the happenings without any prejudice; however, there are some moments when that ‘rarely’ actually happens and we get some really good books to read. The Dawn: Marathon Race to Acche Din is one of those by Phidalia Toi, an author who comes from the North-East of India and has a great hold and understanding on the phenomenon which turned the political waves in India in an entirely different direction – the rise of Narendra Modi pre and post-2014 general elections. Today, we will analyse the same book by her.

The Dawn promises to deliver us a general scenario of the momentum which was made during the run-up to the general elections in 2014. She begins with a general chapter on democracy and sums it up beautifully. Then she moves on to recognise and present to the readers the fault lines in the politics of the Congress which led to the rise of AAP before 2014. Finally, she comes to the core of the book – the rise of the man of the moment – Narendra Damodardas Modi! The analysis which Phidalia presents to the readers is remarkable as it comes directly from the author to the reader without any possible corruption in the narrative. She does not have any bias or ego or prejudice and the readers cannot find any fault with what she writes.

The chapters which jury the rise of Modi pre-elections are a kind of observation of his skills. Phidalia observes Modi bit by bit and then we come to the section which describes the oath taking ceremony in which Modi has called not only people from India but also from abroad and ironically enough (surprising for many ones) the PM of the closest neighbour now, Pakistan! Then finally the author comes to her general purpose for this first instalment in the series of five books – The Dawn. She explores the work done by Modi government at the Centre in their first year and also goes on to identify the challenges and problems which might have come in the way to development or might come in the near future.

Phidalia calls upon the fringe elements openly and clearly states that if the Modi government tries to pull the same rabbit from the same hat which the BJP did during the Vajpayee era, the results will be the same again!

For me, the book was a very nice read and I just came to know so many things which I might have ignored during the 2014 general elections. Not only persuasive, the writing by Phidalia is also substance because she has not built any hypotheses in her book. She has backed her observations with the facts which were there in the mainstream media. I would certainly recommend this book to all the readers who wish to read some political stuff – not the biased ones, but one which is neutral and calling spade a spade!

A must read for those who want to understand the politics before and after 2014 (right after and right before). A great book by Phidalia Toi!