Moving for Moksha by Alok Mishra – Review of the poetry collection 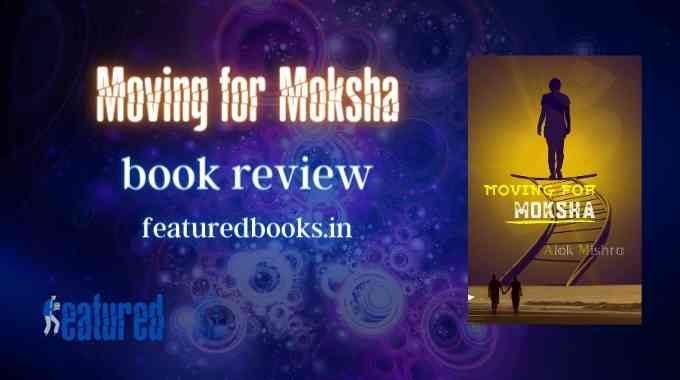 Though the poetry collection appeared in 2020, there is nothing called ‘late’ in the life of a reader who is constantly looking for something wonderful to read; something that can inspire a reader to think about perspectives ignored by many is always a good book! Moving for Moksha, a poetry collection by Alok Mishra, the current generation Indian English poet, does not have many poems and the poems are also not long. Rather short in length and ambiguous in meanings like his earlier collection which was entitled 13 untitled and weird poems, these poems in Moving for Moksha will compel the readers with or without a literary and religious-cultural background to think, think hard and think deep.

‘Sometimes by water
‘and sometimes by the wind,
‘my random lines on sand will be
‘erased. What am I now? A ruddy rage?
‘He said losing and winning matters not at all!
‘He told! Unbecoming is a part of becoming again…’

When I moved ahead reading the poems, also navigating through the images that precede the poems, I found the above-quoted lines from a poem ‘And I Thought’ and I could sense, barely, what might be in the mind of the poet while he was writing these lines – self-awareness? The realisation of one’s weakness or strength? The realisation that life has to end… understanding that life, as energy, does not end? Interpretations are so varied and within a minute, the mind sways from this to that conclusion and one can only admire the way these lines have been ‘designed by the poet to insinuate others to think… Alok Mishra, as a poet, seems to draw his inspiration from the ancient teachings offered in Hindu religious texts.

A man is made of emotions,
largely, and intellect – wit,
humour, rationale and that’s it?
No! A man is the rob that hides a soul

This poem that begins just after And I Thought, opens with these intriguing lines mentioned above – emotions, intellect, humour, rationale and a human body – the soul has been given importance and more than any constituent of the humane. These lines also confirm that the poet is fully convinced by the looking inwards philosophy as propagated and practised by the Indians for many thousand years. The life that we live is merely an illusion and we must not be excessively involved in it – the Kama, Krodh, Moha and Vyasan…

There are only 15 poems in this collection, 14 images and a flow that might be felt once a reader begins reading the poems one by one. The last poem, offered as a surprise, is comprised of the titles of the poems included in this religiously-inspired poetry collection by Alok Mishra. You can find that poem at the end of this book. The book contains some fine allusions to the myths and beliefs that modern poets have generally ignored at large. Style and meter matter no more to modern poets, especially Indian and we can see the same thing here. However, there is a similarity that anyone can find in the organisation of the lines in every poem.

To sum it up, by ignoring the technical aspects of the poems because there is not too much to observe, a reader will find the content which is compelling as well as surprisingly striking. As a reader of poetry, you are forced to read it, again and again, to find out a meaning or settle with an interpretation that might suit your thoughts. However, the next time you read the same poem and you might end up negating your previous assessment! The allusions to Hindu beliefs and symbols are made apparent and anyone who has a deep knowledge of the texts can understand those. However, there are also allusions to the ancient Greek myths on very few occasions and it’s good to see a poet using the ancient tools to put his thoughts to the fore. Yes, one thing has to be noted that the poetry collection also seems inspired by personal events in the life of the poet… one could see and feel it.

Well, one thing also needs to settle that Moving for Moksha offers too little to the novice in poetry reading and beginners will have a hard time dealing with the allusions to satisfy their James Bondesque urge to reach certain conclusions… To be short and frank at the end, the poetry collection is challenging and should be read with an open-mind and eager heart! You can get a copy from Amazon India by clicking the link below:

Review by Ratan for Featured Books

Moving for Moksha by Alok Mishra – Review of the poetry collection

A poetry collection by a contemporary Indian English poet that challenges you… your knowledge and your resolve to find conclusions for the poetry you read… are you up for it? Moving for Moksha is an interesting as well as intriguing read! Recommended for the readers who have read enough poetry in the past!