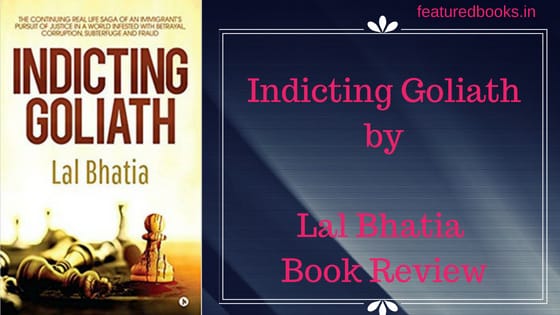 Indicting Goliath is a real-life story of Lal Bhatia, a much-appreciated and multi-talented person who was granted the permanent US citizenship at one time. However, later, he was subjected to illegal pursuit, unjust trial and immense torture by the FBI and the department of justice USA just because he tried to uncover a money laundering case which involved high profile crooks and some people who were government officials. This book is a first-person account of the events which occurred in the life of Lal and also provide the list of references and facts at the end of the book.

Lal Bhatia has used the mythical battle between David and Goliath to put the title on his book as Indicting Goliath. He has put himself in the place of David and Goliath metaphor has been used for the United States of America. Lal Bhatia writes that the judges and the FBI officials were knowing his innocence but they did not do the right thing as they were in a collision with the conspirators.

This book can be seen as the journey of Mr Bhatia’s part of life which he spent hiding, being chased, imprisoned and tortured by the corrupts and the crooks. He was also forced to live apart from his wife and family. He was bereaved of every facility but still, he managed to collect facts and counter facts inside the prison by his determination alone.

Lal raises many questions in front of the US Government and authorities and they have not yet responded to him. He has been freed of all the charges by the US Department of Justice but, the question remains still, what would someone say no! Why did they put a main under trial for no fault? Who will take the responsibility for the years spent in jail by an innocent man?

Indicting Goliath will be a very good read for the Indians who want to see how the life on a foreign land might be… Indians will be proud to know about the determination of the person whose resolve to fight against injustice was so tough that he did not submit or give in… read this for Lal Bhatia! Read this book for the sake of justice because sometimes, we have to snatch it from the Goliaths. You can get a copy of Lal Bhatia’s book by following the link to Amazon below:

review by Sudhanshu for Featured Books

Lal Bhatia has opened up in his debut book about his difficult days in the USA when he was falsely accused and tortured heavily for no crime of him… is the how the USA treats an Indian?