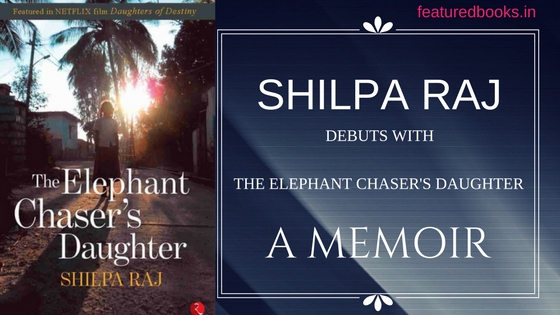 The Elephant Chaser’s Daughter is an upcoming book which will be released at the end of this month. This work by Shilpa Raj, the author, is a memoir and not only that, this is the first ever memoir to be written by any of the women from a lower section of society in India, known as Dalits. It has taken Shilpa almost the hard work of 7 years recollecting her childhood memories and also the sufferings she had to undergo in her life. And all this, she penned down in her debut work which is going to create a sensation, by all means possible, in the world of Indian writings. The story has everything – share of emotions, share of harsh realism, share of hope for the future, share of the craft of writing and the most important thing which makes The Elephant Chaser’s Daughter a must read is the determination of Shilpa Raj. She was not supposed to acquire even the basic education if she would have continued with the social system of India but she dared and she transcended!

The memoir by Shilpa Raj is already available in the online stores like Amazon and you can get your copy even before the book is formally launched. And our team believes that this book will create a monumental milestone in the Indian literature because of the high-end credentials which might be attributed to this book. This is a first ever memoir by any Dalit woman in India. Shilpa Raj, who belongs to the untouchable community in India, has taken the step further and decided to challenge the current social structure in our ‘new India’ which does not allow children of certain section to have education; certain section of people have to sleep without food; a certain class doesn’t even have the right to be the part of mainstream society… are we serious? Is this the India which we imagined 50 years ago? Are we heading in the right direction? These are the questions asked by the author Shilpa Raj who does not only speak about her life and her family in the memoir but also speaks for millions other like her who don’t even know whom to complain!

The Elephant Chaser’s Daughter will be the book which we will be reviewing very soon. The initial read has impressed us and we are sure that this book will be not just a memoir! Shilpa Raj has many stories to tell her readers and we strongly believe that her attempt to touch the hearts of people as well as question their thoughts will be highly successful. And just to mention, renowned book critics from India as well as abroad have already commended the book by Shilpa! We will be back with the review of Shilpa’s debut work as soon as we finish reading the book. Till then, enjoy reading folks! And make sure you also get your read of this amazing piece of literature. Buy the book on special discount at:
http://www.amazon.in/Elephant-Chasers-Daughter-Shilpa-Raj/dp/8129147696