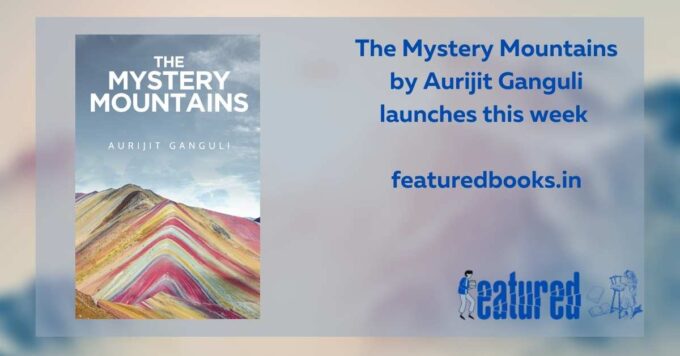 The author of The Shambala Sutras, Aurijit Ganguli, is back with another book, The Mystery Mountains. The book is going to release this week, around the weekend. Aurijit has chosen the day for the launch of his upcoming book very thoughtfully as he wants to make his readers’ weekend more exciting and fun-filled. The author who is a voracious reader and has always been interested in history and mythology was much inspired by the success of his first book. The responses and feedback he has received from readers led him to write his second book.

It’s been almost two years since his debut book got published. And now Aurijit has come up with his next title. An author who looks forward to self-learning and growing as a person, as a human being during his process of writing, he believes to offer the readers the content that is loaded not only with entertainment and excitement but also with a dose of inquisitive interest in the topics being discussed. He believes in facts and information. To gather facts and information and incorporate them into a fictional setting demand a great amount of time and effort. After reading his first book, we have come to know that he is thorough in his research. Also, he very well understands how to and how much to use acquired information so that it doesn’t distract the readers. After all, an overdose of anything is not good for fiction.

Like Aurijit’s previous book, this book also belongs to the adventure-thriller genre. And the new title, The Mystery Mountains, also gives you a hint that it could be a sequel to The Shambala Sutras. However, the author has denied this hint outrightly and informed us that The Mystery Mountains is not a sequel to his previous book. It is completely a new story in a different setting. Aurijit further says that except for botanist Arjun and chef Lisa, nothing has been common and linked with his first book. Both the protagonists will take you to their new mission, this time far beyond the borders of India. The cover of this novel also looks stunning and gives away the hint very convincingly into the world of secrets and mystery in the mountains.

According to Aurijit, The Mystery Mountains is one of the scarce books written by an author in India, where the milieu of the story and actions is entirely outside India. Probably this is the first fiction which has bolstered the case of anti-diluvian civilizations, against the mainstream history that is taught in schools today.

The Mystery Mountains will be a bundle of history, culture, knowledge, adventures, mysteries, thrill and excitement. It will take you far, to the mountains of Peru, in the Pre-biblical Era (before the Great flood) where there is a new mystery to resolve. Readers, are you thrilled to travel to Peru with Aurijit’s new novel?

When the book is launched, we will also come with a detailed review of the same. In the meanwhile, keep reading and keep sharing the books you like with other readers. You can read Aurijit Ganguli’s debut novel The Shambala Sutras by getting a copy from Amazon India.