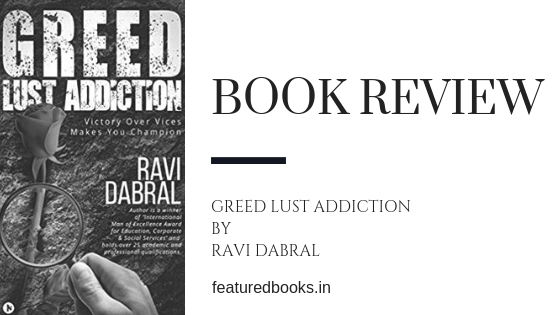 As a revenge novel, a crime thriller in better words, Greed Lust Addiction works perfectly in the first half. However, in the second half, the novel takes an entirely different turn and it becomes a work of art rather than being a mere crime thriller where the protagonist seeks revenge from the enemies. Greed Lust Addiction transcends from being a casual thriller to become a matured narrative that emits not only entertainment but also wisdom. Ravi Dabral, the author, as one of the best crime thriller novelists of India right now, has done a very commendable job in his very debut work and he has to be applauded for this!

The plot in Greed Lust Addiction is versatile. It begins as a crime novel where we know of a murder, murder of Suraj – an investigative journalist. Thereafter, his younger brother, Vijay, seeks Suraj’s diary and tries to get to the root cause. He discovers many interesting things about the life of his elder brother by reading the diary and somehow reaches to Uttarakhand, in the Ashrams of Guru Ji to seek more. He is then told the truth that Suraj is alive. Inspired by his elder brother’s amazing life and will power, Vijay also joins Suraj and Guru Ji in seeking justice and getting the corrupts punished. In short, this is the plot. However, when you will read the novel, you will understand that the plot is far more interesting in actually reading the novel than listening about it.

I will not judge the theme. Let it be judged by the readers themselves. The theme in Greed Lust Addiction is wide and it does not limit itself to circumstances. You can know about many interesting things by reading this novel. Ancient spiritual and religious things are discussed widely by the author and it all looks perfectly planted rather than overly stuffed.

Greed Lust Addiction has been written by Ravi Dabral with a vision that extends beyond entertaining the readers. He has kept the language simple and comprehensive. He has tried to reach as many readers as possible rather than making a name for himself among the elite readers only. In terms of plot and theme, he has stuck with his vision and ideology rather than sticking with the novel’s axe to grind. As a whole, Greed Lust Addiction certainly lacks things. However, it would not be easy to dismiss the excitement and interesting things in the novel on the basis of what it lacks. We have also to consider what it offers and there, it succeeds!

I will rate this novel 3.8 out of 5. I will keep my rating for language, theme and the narrative. The plot could certainly have been better but it’s good enough to complement the theme and the narrative. I am sure that the readers who go through this work will appreciate the writing of Ravi Dabral. He is also planning to bring out the sequel to this novel and that would certainly be interesting to see. For now, you can get a copy of this novel from Amazon India and enjoy it. Here’s the link:

buy the novel – click here to get a copy