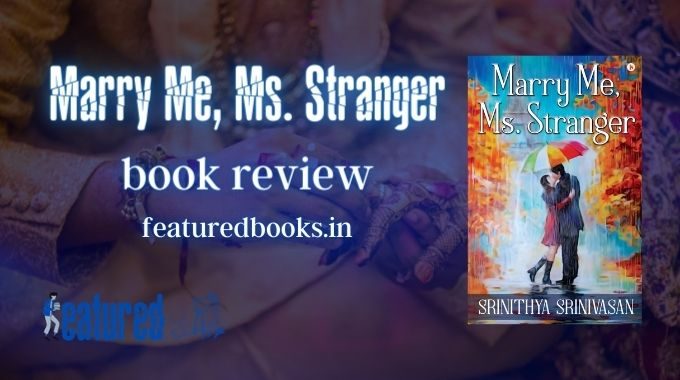 What could be better than kickstarting January 2021 with a novel that has already received some appreciation and garnered buzz for itself in the bookish circles? Yes, the novel with which I am going to start my review-thon for Featured Books is a debut one written by novelist Srinithya Srinivasan. Though the novel appears to be a feministic piece from the above, once you start peeling the outer layers, you get something entirely different. It is a light comedy decorated with various other elements that save it from being a monotonous piece of fiction. Here, Srinithya has shown uncommon maturity and some good hands in writing fiction that we seldom expect from the debutants. Marry Me, Ms. Stranger has impressed me as a romantic comedy with some serious questions and points to ponder… a novel that has been empowered to stare right into the eyes of the readers and ask – how did you like me as a comedy, Mr or Ms stranger?

From denying to acknowledge that Aman will ever be her husband to being Aman Rajput Singh’s wife and claiming it in public, Janani Iyengar travels quite a distance in the course of the novel and so does Aman Rajput Singh. Aman and Janani are two central characters in the novel (and perhaps the only two distinguishable). Srinithya’s novel is almost a memoir and, as if, Janani is narrating the story of her life to the readers (perceived as people surrounding her). The narrative is humane, charged with emotions and mixed with day-to-day content.

The novel begins on a note of conflict between Aman and Janani. Janani wants to be independent as she thinks that most of the boys are same. Aman, on the other hand, makes it even difficult for Janani to believe in him because of his weird acts and conduct. And therefore, the marriage that was supposed to be the union of two persons remain as a forced juxtaposition of two contradictory charged poles. The readers will enjoy most of the parts that describe interactions between the two – Aman and Janani. Both of them narrate their parts in the present and future, respectively. However, Janani has the upper hand, most of the times.

Sarcasm and irony, humour and satire, fun and entertainment… all these elements are present in the novel in plenty and the readers must not get bored of these. However, at times, the readers might want to skip all these and just realise where the novel ends… to all those, hold tight… you will find it rather sooner if you read the chapters carefully. It is a journey towards realisation and light. 🙂

Srinithya’s work has been rewarding for her as she has been able to hold the pieces together and create something that is whole and not fragmented. She has got most of it right! As a debut novelist, her work should be appreciated for making thus far and the readers’ opinions must be the testimony to it. I am sure it will be a good stepping stone for the author in the long run.

You can get the novel from Amazon India and read it on any day you might enjoy your leisure. The novel can be finished in 6-7 hours in a single sitting which I won’t advise. So, take your time and drag it to two days and you will enjoy most of it. Click the link to Amazon India below and buy your copy in Kindle or paperback format:

Buy the novel now – click here to get a copy

Review by Smriti for Featured Books

It’s a debut made in style by Srinithya Srinivasan. She has been highly successful in making an impact and this is what an author wants… Marry Me, Ms. Stranger is a comic episode, prolonged, in the life of a couple… the two realise the power of love and walk towards it, gradually, with many things in the course. Do read it!