The Lonely Drummer and Other Poems 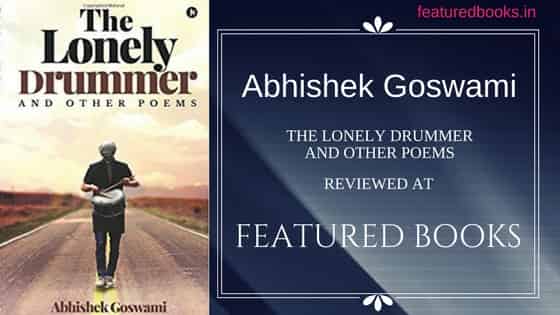 “There was a young lad called Sydney,
Who for all his weight was nothing but a puny.
He could lift any weight you can think,
That too in an eye’s blink.
But alas, he died of a stone in his kidney!”

Sydney’s Destiny and some of the other poems in this collection by Abhishek Goswami, The Lonely Drummer and Other Poems are rather humorous! You will like the aphorism kind of poetry by him which don’t only provide instant humour but also wonderful lessons for the life in the simplest possible way because the poems in the collection rarely take the readers to another ‘layer’ of poetry except for what is being offered as the text! An enjoyable and lively collection, to say the least!

There are 35 poems in this debut book by poet Abhishek Goswami who has decided not to make it a monotonous affair by writing poems on vivid themes and issues. He has written poems on life, happiness, sorrows, joy, pleasure, pain, dilemma and other abstract ideas including some of the verse-tales, as critics have called it. One long poem which perfectly qualifies for the adjective verse-tale is undoubtedly The Blue Book which is written wonderfully in five parts. This is a tale weaved with suspense and verse-excitement and readers will surely like it, I am sure.

Yes, I would surely like to mention here Abhishek’s poem Free Verse or Worse! This poem, as far as I could fathom, mentions the problem with the poets who write without rhyme. However, if my interpretation is true, there is no reason to reason over rhyme because rhyme is no reason at all! Every poet should have the liberty to write whatever he likes and in whatsoever form he wants that to be!

There are also poems which exhibit deep philosophical concerns of the poet. The Fleeting Mind, Circles of Life, Far from The Madding Crowd and some others represent the frustration (intellectual) life is! Abhishek has been successful in giving a philosophical touch to his debut collection The Lonely Drummer and Other Poems… no doubt!

“A bigger grief overcomes a smaller one,
And we become engulfed again.”

His philosophy, as depicted in his poems, is a somewhat compromising one like the old stoic philosophers who seemed rarely affected by what goes by around them!

For the readers who love to read poetry, Abhishek’s collection is a must read! You can enjoy all those 35 poems and it won’t take so long. You can get the copy of the book from the Amazon link below:

The Lonely Drummer and Other Poems: Buy Online: Amazon

The Lonely Drummer and Other Poems - review

For poetry lovers, Abhishek’s debut collection is certainly a treat! Just enjoy the poems without thinking anything else!