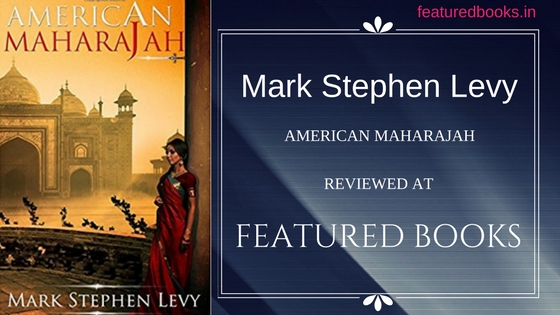 Who does not love reading novels? Surely, I am taking all those morons out of proportion who do not believe in the power of reading. For the readers, American Maharajah is a new novel by Mark Stephen Levy which has been moulded on an Indian theme with twists and turns and a crafty plot and enjoys a certain dimension of a link to the ancient mythology of reincarnation of some prince in a village of Rajasthan. Today, I am going to review this book by Mark for the readers of Featured Books blog. Yes, I liked the novel and I do have some faultlines to highlight. Let’s start it then.

The story of the novel American Maharajah begins in the USA and we get to know the central character named Ravi Shankar, known as Ravi only, most of the times. We also get to know that his parents are running an Indian food restaurant and it runs great. Melissa, Ravi’s American girlfriend, is also introduced at the beginning before things got hectic and they break up just before Ravi’s tourism to India. And once Ravi is in India, everything changes – completely!

The story of the novel is simple and it uses the mythological instance of reincarnation of a prince from Rajasthan. Mark, just being a traveller, has got the story better than perfect and it surely catches the attention of the readers. However, the Indian phrases, at times, read weird as well! Not all the times the ‘sar hilaake’ nod can be amusing or too Indian.

Along with Ravi, the character that is given more importance in the novel is surely Aishani, who is introduced when Ravi gets himself lost in the desert – almost retiring to death. Aishani is a beautiful lady who lives with the old king Suraj Pershad in the palace of a Rajasthan village. The twist in the story comes with the meeting that accidentally takes place once Ravi comes to the palace and he is called ‘Amar’ and ‘son’ by the old king. The king and Aishani think that Ravi is, in fact, the reincarnation of Amar, the prince who had died years ago.

The dilemma of Ravi and his curiosity of getting to the depth of the things have been painted very well in the words by Mark. In the novel, the discoveries made by Ravi when he visits India back after he receives a letter from Aishani are very well planned by the author. Ravi learns that he is not the real son of his parents in the USA – then who were his true parents? Was he really the reincarnation of Amar? And if he is truly the reincarnation of Amar, would the curse of the perpetual disappearance of spring come true?

American Maharajah is as interesting as it could be! The novel has been written in simple language and a reader can enjoy it and read it really fast because of the narrative’s ease.

However, the plot could be a little more implicit at times. The theme is, somewhere, between life’s true purpose and the ‘system’ that we believe exists but don’t know the nature of it. Mark’s depiction of Indian society is weirdly beautiful. He is a frequent traveller and he has, perhaps, used his experiences.

You can enjoy the novel American Maharajah by him. Many readers have read the novel and they are mostly happy with it as shown on the platforms like Amazon and Goodreads. You can have your read and then see for yourself how good has the author done it and where has he failed to make the impression felt. Nevertheless, the novel is a sure one time read and it is rather short as well – you can read it on a Saturday night or on a Sunday morning.

Get American Maharajah from Amazon India

review by Roushan for FB