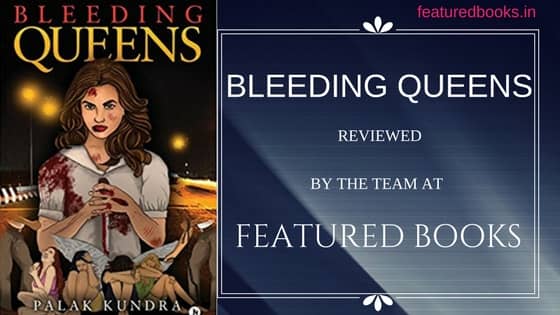 Palak Kundra’s debut novel, Bleeding Queens, is a work which could not only act as an agent of literary pleasure but also as an agent of change which could motivate the women in the country who still feel it’s their moral obligation to bear everything and still be mute and nice. She has weaved an intriguing plot and around the plot, the story which supports the plot and also the theme-at-large as well as the message (conspicuous enough to be comprehended). Bleeding Queens has been written with a purpose to deliver a direct talk to the women of the country – you need to hide no more; come out in the public and breathe the air of freedom sans fear!

The Storyline:
The story of the of the novel is rather straight and an easy read. Having some of the moments which might give the readers a moment of awe and surprise and shock (maybe) the novel’s story flows smoothly till the end. And the best part is that the novel is written in Hindi and as we Indians are pretty handy in handling this Hindi, a reader can easily read the novel in one go without any trouble. Major characters in the novel are Diljit – the protagonist girl, Karanveer – her brother, Rohit – her love interest and her parents. Other than these, there are the criminals, the police personnel and some minor characters who form the part of the narrative.

An acting aspirant, Diljit is a girl from Delhi with Punjabi roots. She wishes to be an actress someday and makes all her efforts towards learning the skills of acting. Unlike the usual saga of our society, her parents and her family support her with the dreams she envisions and the desires she cherishes. Everything goes around with the causal pace life is meant to move at, until the night of horrific incident approaches. Some criminals cum savages who are hungry for the pleasures of women flesh prey on Diljit and rape her. They kill her father who tries to protest and also hurt her mother. Everything seems to stop and life almost becomes null for Diljit and her family. But here, the novelist that Palak Kundra is, she gives the charge of revenge not in the hands of Diljit’s brother or her lover! She rather settles with the women power (no more empowerment promises) and lets Diljit take her own revenge. The real joy in the narrative only approaches into the novel once we see Diljit in a new avatar. And everything that she does leaves us in a pondering stature – was she right? Was she wrong? Had she to do what she did? There are many questions and the answers are to be decided by the readers. Read the novel and find your own!

The Writing:
Palak has kept her language within the ambit of our day-to-day casual discourse and a reader can easily understand even the rarely used Punjabi phrases. This is surely a good part played by the author!

The Verdict:
Bleeding Queens is a MUST READ novel by all means. Especially the women readers should read and understand what it feels like taking the commanding position in life and never succumb to the schemes of the world. Get your copy from the Amazon link below and read the novel:

A sure reading! Do read the book by Palak because she has done a great job in her very debut novel Bleeding Queens!