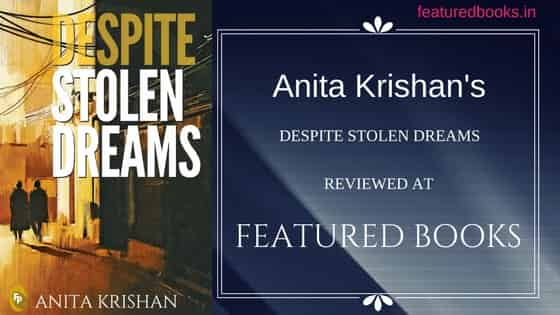 Despite Stolen Dreams is a novel written by Anita Krishan. Read the review of this book by Featured Books team. Based on terrorism in valley and a man’s hope for finding peace and life, this is interesting as well as enlightening!

A game of cat and mice at the beginning becomes a game of surviving in two distinct worlds – one lives the lie and another leaves on living the life and is merely dragging himself to the distances. I will see the book as a contrast between two people and two lives. The goodness is represented by Wali Khan who is progressive and craves for happiness, peace and love and the evil is represented by Hashim who gives in to his adversities and embraces the ill-taught form of Madrasa education in the form of jihad and forges himself into a hard-core terrorist for whom shedding blood is just nothing!

The novel Despite Stolen Dreams begins in the valley of Kashmir and develops as well as ends in Delhi. Focusing on the life of Wali Khan, Anita has used her central protagonist very wonderfully – as a metaphor which represents one and the all. He meets Kashmira in Delhi who helps in settling down in the seemingly mildly hostile environment of the capital – the pollution, the noise, the arrogance, the carelessness of the people – are all new for a Kashmiri person like Wali. When he is persuaded to change his dressing style, Wali fears to lose his identity which is his temporal fear when he realises that humans have only one identity.

The novel has twists to offer to the readers. Wali and his family members are settling down in Delhi very well and in spite of his periodic commemoration of the Kashmiri motherland, Wali is somehow at home and after his social affairs with people from different parts of India, he is more than happy. His long-forgotten fear returns back to Delhi when he meets the terrorists once again and now is the time which has all the answers – will Wali live? Will his beloved relatives live? Will Hashim have mercy on him?

Another aspect of the novel is the wonderful study of human psychology. Anita Krishan, like a seasoned author as she is, has analysed the events very well. She has done a justice with her characters and has offered all of them a chance to redeem themselves; some fail in doing so and some are successful. Shakeel is the one who transforms and he becomes a complement to Wali’s quest for peace and harmony in life.

On all the fronts – theme, plot, narration, diction and reading ease, Despite Stolen Dreams stands tall! It is certainly a heightened novel which excels most of the contemporary pieces of literature being written. It does not harp the gloom only; it also offers consolation and hopes. Terrorism can surely meet an end… Anita Krishan’s novel is a MUST read for all the lovers of Indian original fiction which does not borrow the overdone plots and themes and even mimic the stories from the foreign literature. She has written something which is entirely Indian, realistic, visionary and also a constructive contribution to the Indian English literature. Do read this piece and let yourself have a chance to be entertained as well as enlightened!

Grab your copies from the Amazon link below:

Anita’s Despite Stolen Dreams on Amazon

by – Suman for Featured Books

In a phrase – MUST READ NOVEL!