Elephants in the Room – Review 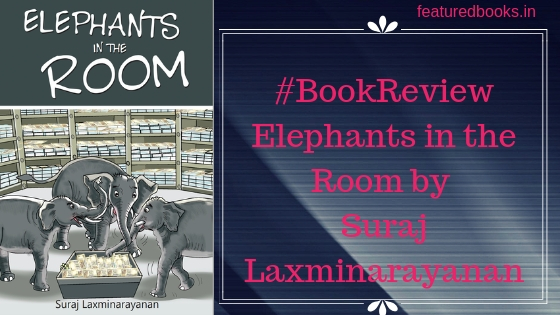 Thriller novels are something which might be termed as the most coveted among the fictional works among the readers. In the case of Indian English fiction, crime thriller works make a very large pie and they are also read very widely. In recent times, I have also read enough of it and have liked a few and just did not like a few because of the sheer outlook – some are presented in a way that you will love and some are presented in a way that you might not want to drag yourself after reading a part of those books. Today, I will be sharing my experiences and review of a book, a crime thriller one, that I have read recently – Suraj Laxminarayanan’s debut novel, Elephants in the Room.

Theme:
Before I pronounce my opinion on the theme of this novel by Suraj, let me make it clear that there cannot be one certain theme in this novel for many readers. Reader by reader, the theme might be in varying terms – I believe that the bank robbery is only a mat which offers many other themes to further and progress. Such as, the theme of human compassion, human compulsions and also germination of crime in human psyche – these themes take place in the lap of the central or the containing theme that is of a bank robbery by different gangs at once which leads to violent showdowns, encounters, murders and mass shooting inside the bank.

Plot:
Suraj’s debut novel, Elephants in the Room, employs the plot which holds a set of layers together. The major plot goes straight with a few situations of flashback into the events of past and a few scene-shift from here to there. The pieces are stitched together by the novelist to ensure that he offers something – a whole – to the readers which let them enjoy the oneness of the novel. Suraj has succeeded to a great extent as well. And to end this section on plot, it’s not the best but certainly the essential and packed that keeps the author’s debut novel accelerating and moving ahead.

Narrative & Language:
Well, these two are mixed into one because the author has employed these two very effectively in the build-up of this crime thriller. The narrative is like the modern mobile phone processors in which many minds function at once! Suraj’s novel is having a multi-layered narrative which acts on several instances to arouse further intense interest in reading this novel. About the language, I won’t make any assessments as it’s simple, productive and convenient for the readers.

Overall – My impression
At last, I would say that the casual readers of Indian English fiction would surely love this novel for its content, the theme and a twisted plot that gathers the fragments into a work of fiction. Sentiments also form a part of the overall impression as the debut work by Suraj intends to look into (not only at) the world of crime through the eyes of an intelligent narrator who can also peep into the hearts of the protagonists. So, to end this review, I will suggest the lovers of crime and crime thriller fiction to go through this long novel by Suraj Laxminarayanan before they pick up any other. The length of this novel might annoy the readers sometimes because the author has looked inwards (inside the thought and feelings of the characters) a little more at occasions. Otherwise, Elephants in the Room is a great debut made! I will say this!

All the best to the readers of this novel! You can get a copy of this work by following the link below:

Elephants in the Room

A good novel and a perfect entertainer which can be read one-time with interest and motivation.