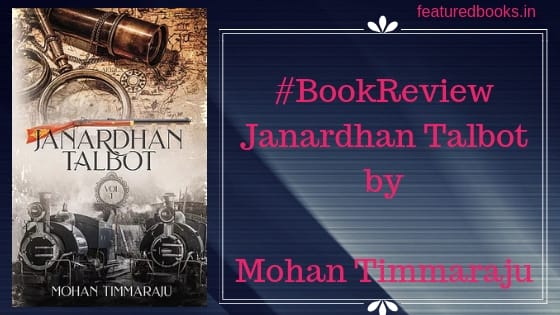 Mohan Timmaraju’s debut novel in two volumes, Janardhan Talbot, is a tale of an Indian young man Janardhan Rao who sets on a journey to England to achieve his goal of wealth, honour and also seeing his dream come true but only until the moment he realises that everything is momentary and unreal unless one is independent. I am going to review the volume one of Mohan’s novel today – Janardhan Talbot Vol 1.

This novel begins in the pre-independence era somewhere in south India. A young guy, in his teens, Janardhan Rao, is vexed with some English soldiers who misbehave with his father and then he unleashes himself on them only to create more trouble and be compelled to leave his hometown and find shelter somewhere else. Only for the better of himself, he looks, talks and behaves more like an English man than an Indian. This aspect of his personality comes to rescue him and secure him a position on the boat that’s going on a tour to England and other places.

There is action in the novel. There is a story in the novel. There is a novel in the novel. Mohan Timmaraju has written wonderfully about the condition of Indians in a British ruled India back in those days. The first volume of the novel is more on the abstract side and it does cover some beautiful scenes that the protagonist is a part of. His life with Jonathan, his learning abilities and his mischevious mind getting onboard the ship… moreover, the women in his life have an important place but he is always in an eternal dilemma that only ends with the thought of Manga – his childhood sweetheart from the native place.

Janardhan Talbot is more about a novel of ideas (the first volume) because it’s constantly under the skin of Janardhan. What he thinks; what he plans; what he sees; how he perceives the world around him etc. feature a lot. And, as a reader, I have to admit that Mohan, in spite of his age, has impressed me a lot with his imagination and capacity of thinking as a youth. I would certainly say that this is a novel that goes beyond the circumference of contemporary Indian English literature. Neither it begins with desperation and nor does it end with too many intimate scenes. Written with a class narrative, the novel has a lot to offer!

I will advise the readers of Featured Books to go through this novel if they want to read something meaningful as well as interesting. It’s a game of mistaken identities that leads you to many ideas and eventually, those ideas lead you to many assumptions and those assumptions will miss the targets except for that one right guess that you take! All the best!

You can get a copy of this novel from Amazon India by clicking the link below:

review by Saurabh for Featured Books

A class novel…. something worth reading this time! Don’t miss it!