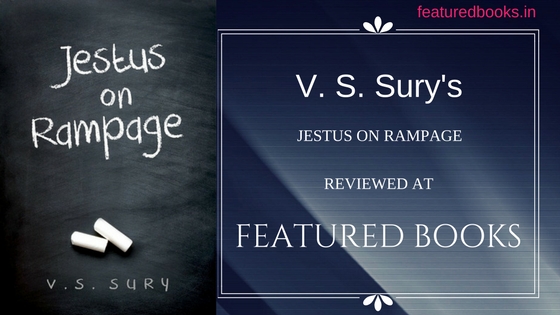 Jestus on Rampage is a novel written by V S Sury and published in the year 2015. This came as a sequel to the previously published novel entitled Jestus. A dark-humour to me, the novel indeed shows a manifold of interpretation possibilities if you read it carefully as Jestus is a multifaceted personality who has many achievements under his belt to be counted by the readers. Popular and with so many names, Jestus is introduced to us as a professor of sciences who is equally a capable person in various languages as well as the subjects of arts. Because of his innovative and absurd ways of teaching and his extremely different approach to education, Jestus is kicked out of the NG University and students are very sad about it.

As the novel progresses and we come to know about the mysterious personality of Jestus through different characters as well as through the eventual exposition by the author himself, Jestus on Rampage begins to work like a science fiction and sometimes like the movie Ex-Machina telling us that machines have perhaps already intruded in our world! You might feel that you are in a constant case of denial and a mild case of acceptance throughout the novel.

The Rationalist Society begins to decode Jestus aka Bagdenborg for his misconducts and the president of the society Norse along with his followers are also baffled when they meet Jestus in his house. Though the author V S Sury also promises you laughter in his novel, he has implicit plans to tell you many other things which are not directly present in the narrative. You will have to apply your own brains to find those out. And let me tell you, the novel is hilarious as well as serious and it certainly is a dark comedy which leaves you in laughter as well as a mood of thoughtfulness trying to understand what’s really happening in the fiction!

The language used in the novel is not so difficult and you will easily understand what’s being read. The narrative is also straightforward and rather easy to unfold just like the plot which does not have any back-loggings. You understand what you read and that’s it. The theme of the novel, however, is a variable which keeps varying between this and that and until the last, you seldom know what you have just read. To name the novel Jestus on Rampage within a single theme is something that cannot be done! Even I leave it to the readers to find for themselves the theme if this weird fiction which will surely keep them indulged…

You can get a copy of Jestus on Rampage by visiting the link below:

By an FB contributor

A weird but casually amazing read which will leave you with a multitude of emotions once you have this novel finished!