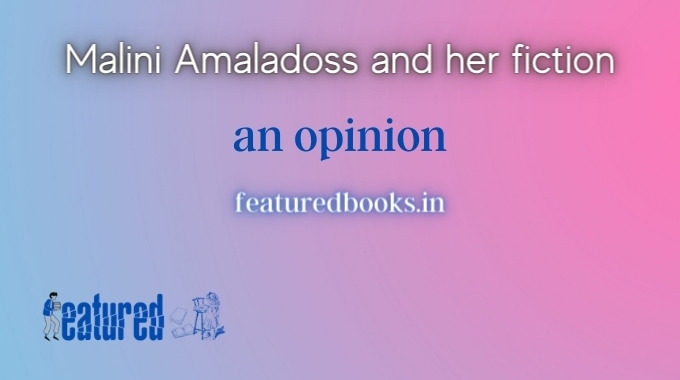 We have been analysing authors who have done something remarkable in the very debut work. Among many Indian authors who produce romance novels, many have succeeded with a very predictable theme and set-up and we all know what’s that. Today, there is a new name that I would like to add to the list of Featured Books – Malini Amaladoss. However, her style and content are not the same like many others. Her debut novel, Retrace Love, has created quite a buzz among the readers of romantic fiction and also the critics and reviewers alike. It is not the novel which is the centre of this piece by me. I would rather take up the approach to this novel by the novelist. Malini Amaladoss has come up with an intense fiction, a passionate story and a very mature theme coupled with aligned plot that has the capacity to keep the readers hooked to the story till the very end of it.

Malini is in no hurry to tell her story and she gives ample time to her characters to develop. Tina and Meghna begin their academic life together, enjoy the days of youth, fall in love with able and handsome men, and one begins her career while another begins her life in the household. Unlike many other template novelists, Malini hasn’t tried to force any scene, description or set-up upon her characters. You will see that the flow comes naturally and a very easy language, though debatable, keeps the readers indulged as they can swiftly turn the pages and keep grasping the story. While the readers at large or critics can argue that Malini’s novel could have utilised a standard or an elite language to give the plot more depth and the theme’s width could have been increased, it could have a very apparent reversal as well. The young readers could just have separated themselves from the range of the novel and I believe that Malini knew it… and hence the simple language.

The fiction with which Malini has introduced herself has been a balanced sum of everything that we need to see in a romantic fiction which should be engaging as well as serious to offer reading pleasure to the readers with a message that remains alive even after the reading session is over. And the novel has been prepared with a design that is compelling enough for the readers to finish it within hours. The episodes keep emerging one after another keeping the readers’ interests alive and also curious to know what might happen next, what revealtions may come from the past and what will happen to the future of the relationships mentioned in the novel… Maloini has been industrious enough in her debit work, I must admit!

Retrace Love has certainly made the readers (who have read the novel) aligned with the gradually unfolding style of Malini Amaladoss as a novelist. She has been able to win the attention of the readers as well as the feedback of the critics. You can read her debut work to assess the qualities and shortcomings of the novelist by yourself. Do share your feedback with me in the comment section and we can be friends 🙂

By Smriti for Featured Books